Chongqing is a mountain city, famous for it's spicy, tongue numbing and hot food, especially the hot pot. However, there are also some nice vegan or vegetarian restaurants around the town that satisfy us who prefer not to cry over our meals. Here are a few we've tried and liked.

Ren Ren Su Yang, 人人素养, is a Chinese style vegetarian restaurant located right in the Time Square compound, next to Jiefangbei (解放碑, literally meaning Liberation Monument)，which is the most famous landmark and also the heart of downtown Chongqing. It might be a little difficult to find, as it was located inside an office building. 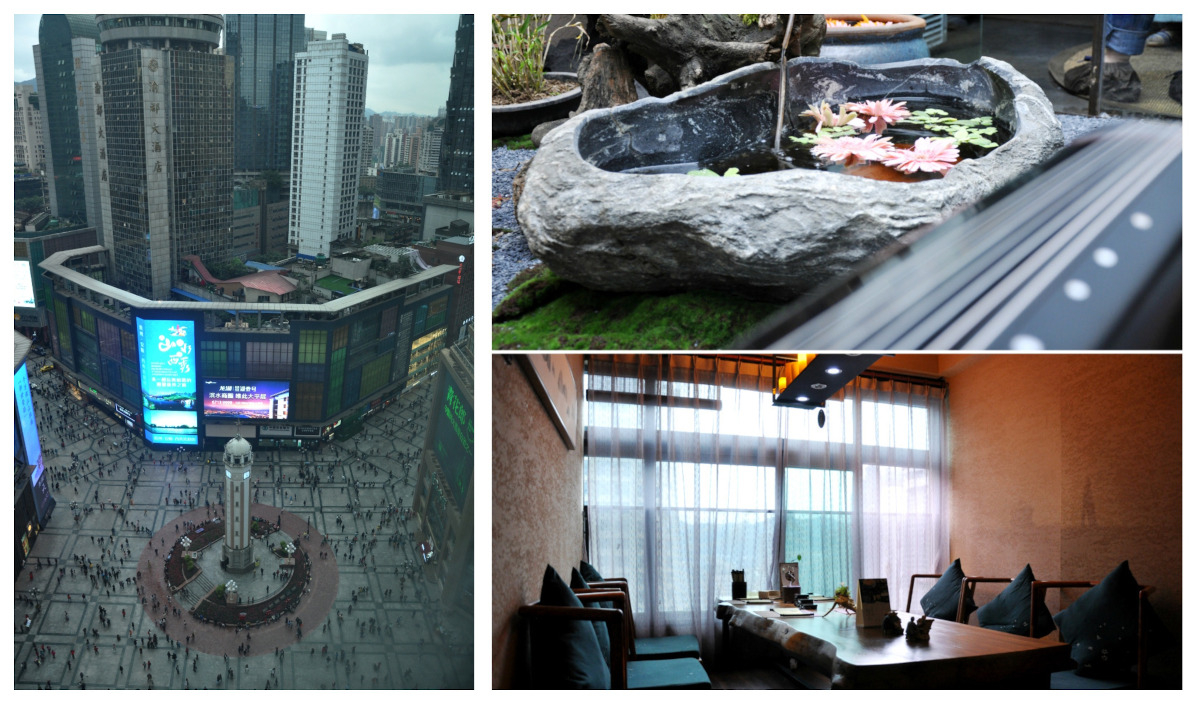 The restaurant consists of several small rooms, which respectively caters 4 to 6 people or more, with a little tiny garden near the entrance hall and waiting area. The garden seems really cute, but due to the fact that is totally installed indoors with everything made of plastic, it is nice but also kitsch. The room is dark with bamboo curtains hanging over. We asked the waitress to lift them up so we could see some great view down there.

The service was heavily based on mixture of some Chinese traditional and Buddist rituals. All the waitresses were dressed in Vietnamese ao dai (traditional Vietnamese clothing for women), although they might argue that was Chinese, but to me it really resembles the ao dai. All the girls wear half see-through black veil, which, I guess, is used to preserve a bit mystery of the whole atmosphere, but I really felt it’s odd and not necessary. They also tended to be overly cordial as well. Honey was totally not used to the super low, big and hard Chinese style chair, even with cushions on it. I didn’t have much complaint about it. 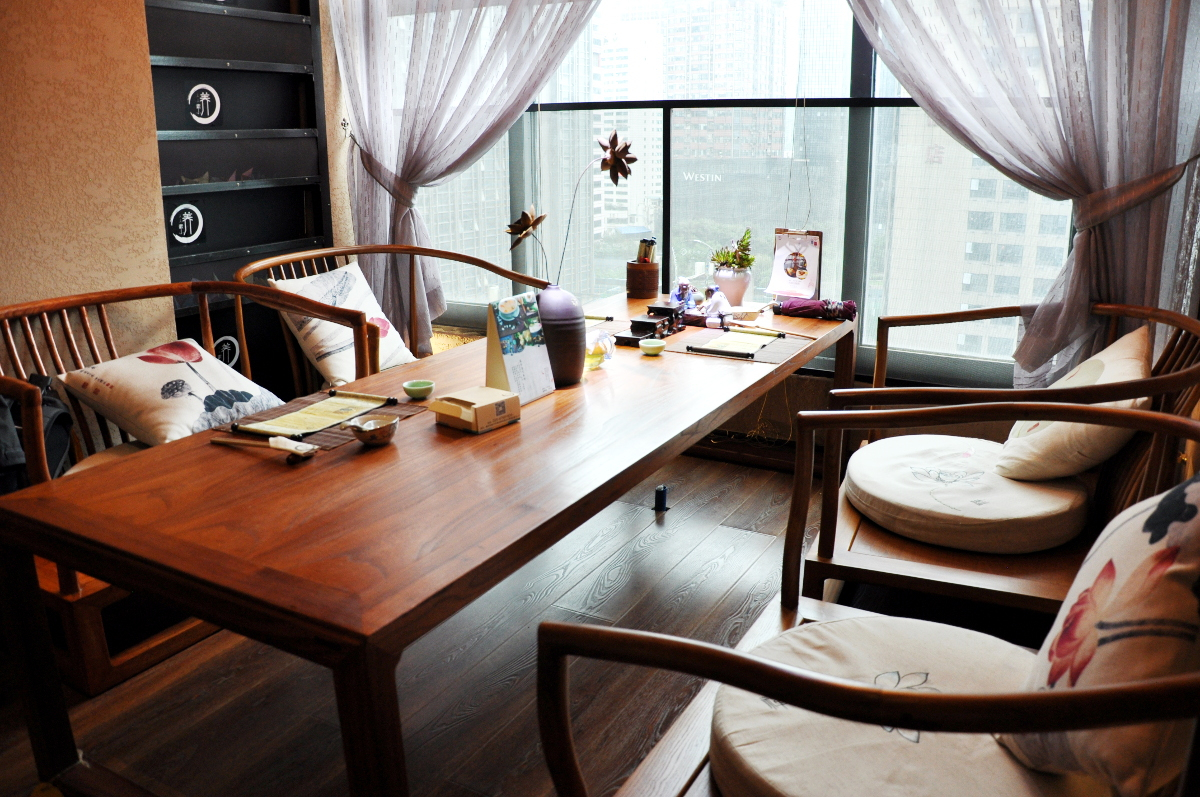 Here they serve the set meals so it’s almost impossible to order what you want exactly. Each set contains 8 to 10 different dishes and they serve them one by one. Although it is not really strictly as courses in Western cuisine, as they keep serving the food once it’s ready, instead of waiting for the guest to finish one course then bringing the next. They do remove the empty plates or bowls if they see you finish something.

All the food were nicely presented here. It’s quite to my enjoyment as I do love the presentation of fine dining. Most of the food we tasted were very good. We particularly liked the sweet and sour mock ribs, as well as the baked mushrooms with barbecue sauce. One of the seaweed one was lovely but way too spicy for us. I do notice that they didn’t do many fake meat dishes as commonly seen in vegetarian restaurants in Shanghai, here they seem to focus more on the original forms of the vegetables and grains, and many dishes feature different kinds of mushrooms. 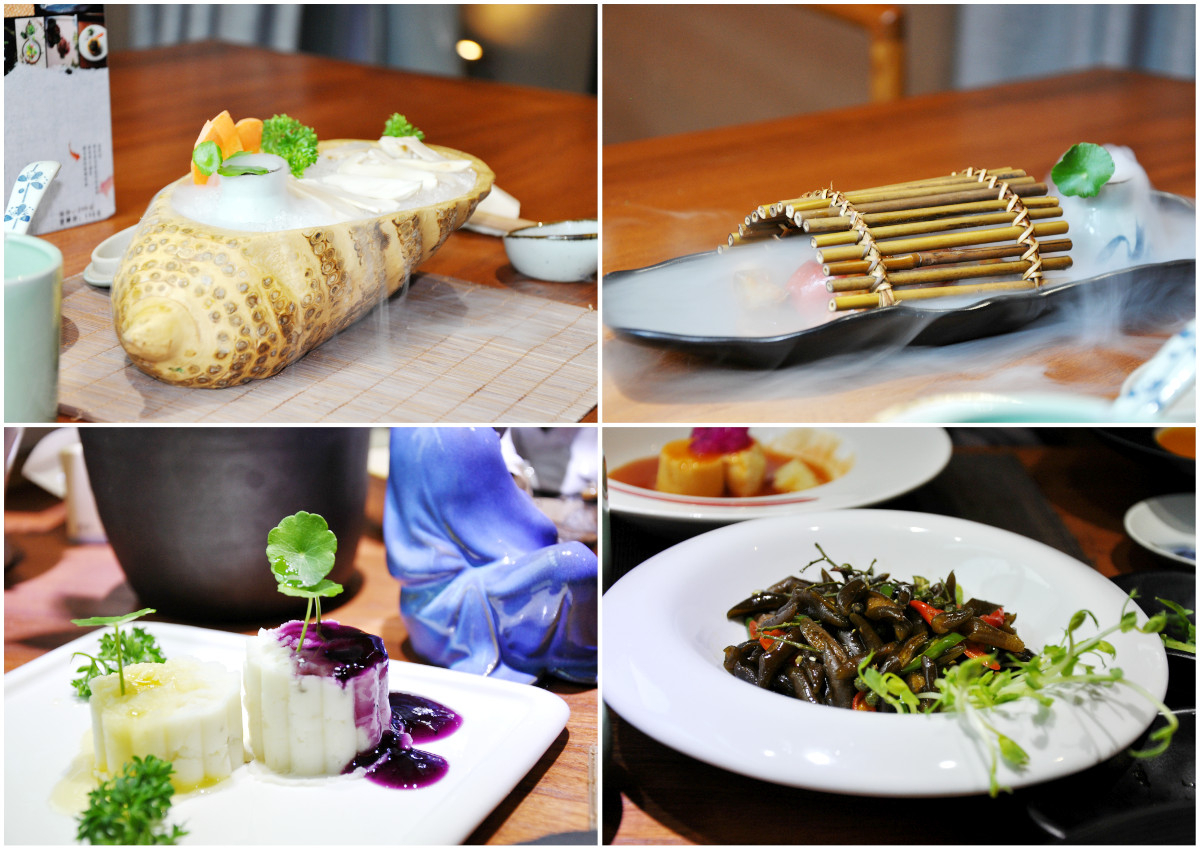 Even though we did specify that we don’t eat egg or dairy, I am not 100% sure they understand that. I suspect one of the dishes we ate might contain egg, as it tasted a lot like Japanese tofu (a kinda of yellow tofu that contains egg). Another dessert plate tasted so much like dairy yogurt, I wonder if they used condensed milk as ingredient without realizing it. Since we were eating with another non-vegetarian friend, we didn’t bother too much to ask for details.

As a whole we were very satisfied with the meal. The price was reasonable for what were served; and the restaurant was in the prime location, with a good view from the top; most dishes tasted nice, and well proportioned, we didn’t manage to finish every bit even we usually do. The ritual process was overly done and became annoying to me, however, it might appeal to you if you like traditional or Buhhist culture (even though to me, what they did was a weird interpretation). We do recommend that you try it once when you land yourself in Chongqing. 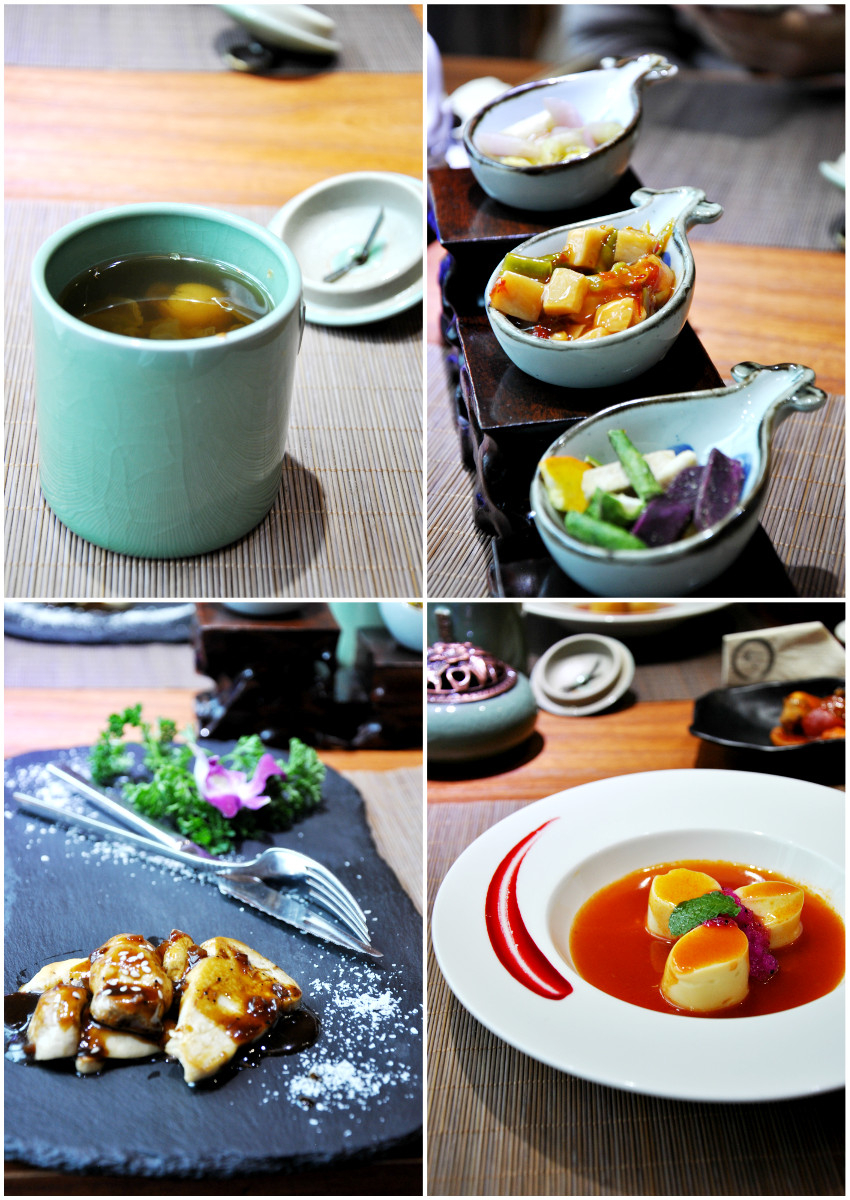 Yi Hua Yi Ye （一花一叶 , literally meaning one flower, one leaf), is another vegetarian restaurant chain in Chonqging with several venues in town. We chose the Dongyuan 1891 venue as we went to the South Mountain in the morning, and this restaurant is also located in the southern bank. It is said the place used to be one of the earliest ports that allowed foreign trading in Chongqing. 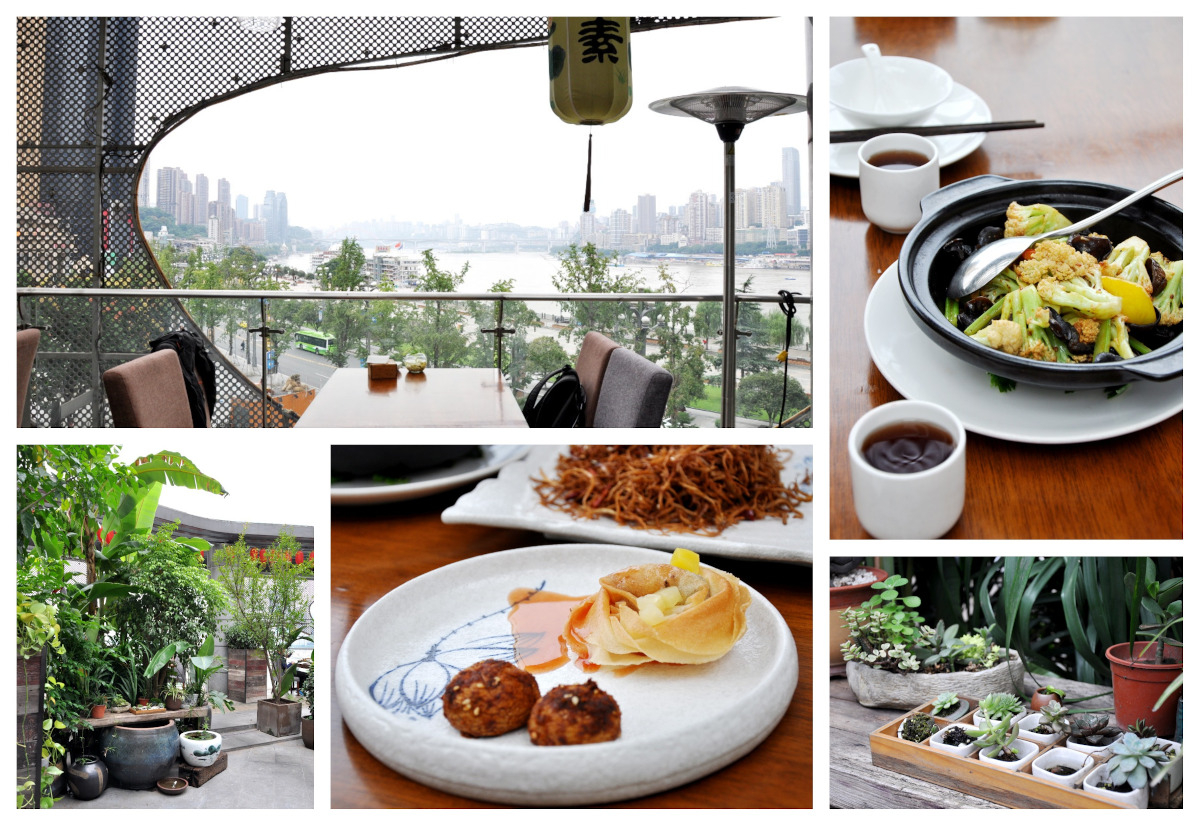 The restaurant is located in a mall attached to a residential compound, also newly built. You won’t miss it as it’s quite close to that golden building resembling Kuala Lumpur twin tower, which is Sheraton Hotel. The restaurant is heavily Buhhist themed. What I like most is that they have open dining area, overlooking the center of the city. No matter in the day or in the night, you get very nice view. The balcony part was also heavily decorated with lovely green plants, which made this restaurant our favorite in Chongqing.

The menu was on the ipad so ordering was more self-helped. I appreciate that way as we could take time to choose what we wanted, without having someone waiting there. Our food were served quickly after we ordered, together with some nice buckwheat tea. 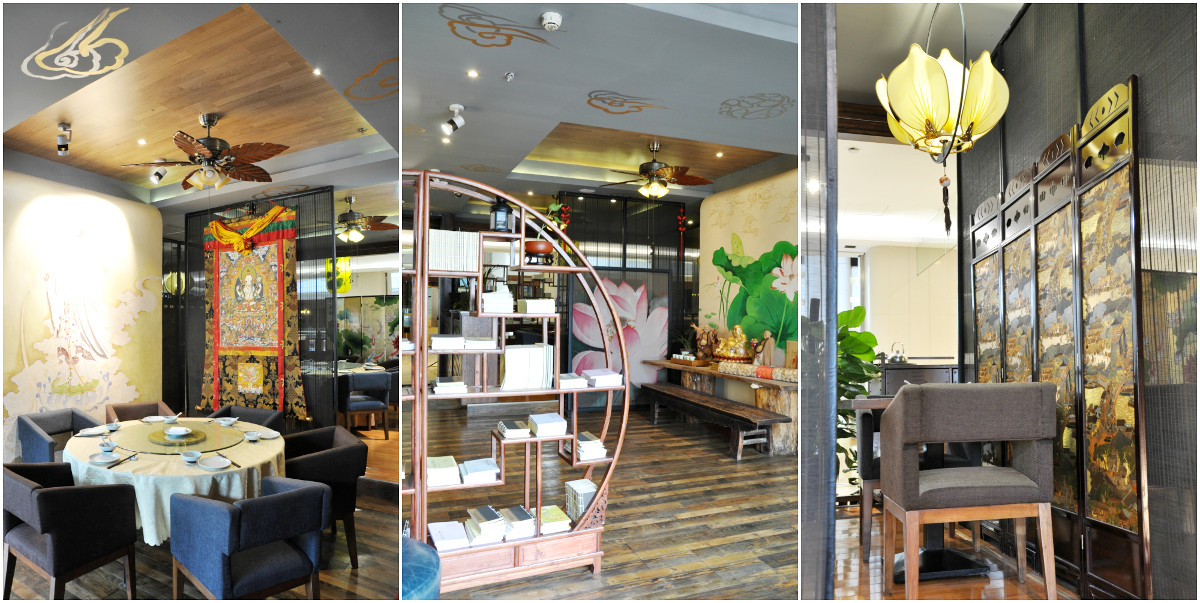 We had deep fried wonton made into a nice rose, with sweet plum sauce, accompanied by two seasoned and roasted mushrooms as appetizer. It was crispy and we liked it. Then we tried the cauliflower and black fugus in iron pot. This one was ok, but nothing special.

Honey was hungry for tea-tree mushroom as that was one of our favorites in Shanghai, but we were quite surprised to find the same dish here looked very different. The tea-tree mushrooms here were much smaller in size, when cooked they almost became threads. At least they were still tasty, although not as good as the ones we tried before. We ordered some fried rice with jujube and pine nuts and that was also ok. What we really liked was the tofu in golden sauce. I was surprised that it tasted so much like egg yolk, and inquired the waiter on that. He told me it was made of chestnut paste and pumpkin. It was really good and I highly recommend that you give it a try. We ended our meal with a Chinese style desert, which is a layered yellow and white stripped jelly featuring mango and coconut flavors. We also had two small bowls of silver wood soup to go with it.

Overall, we loved our experience in this restaurant. The outdoor dining area is definitely a plus. The atmosphere is quite relaxing, and service very quick and friendly. If you ever plan to visit the South Mountain (where you get to see the center from above), this restaurant is definitely a nice place to go to after that (or before that if you aim for the night view!). 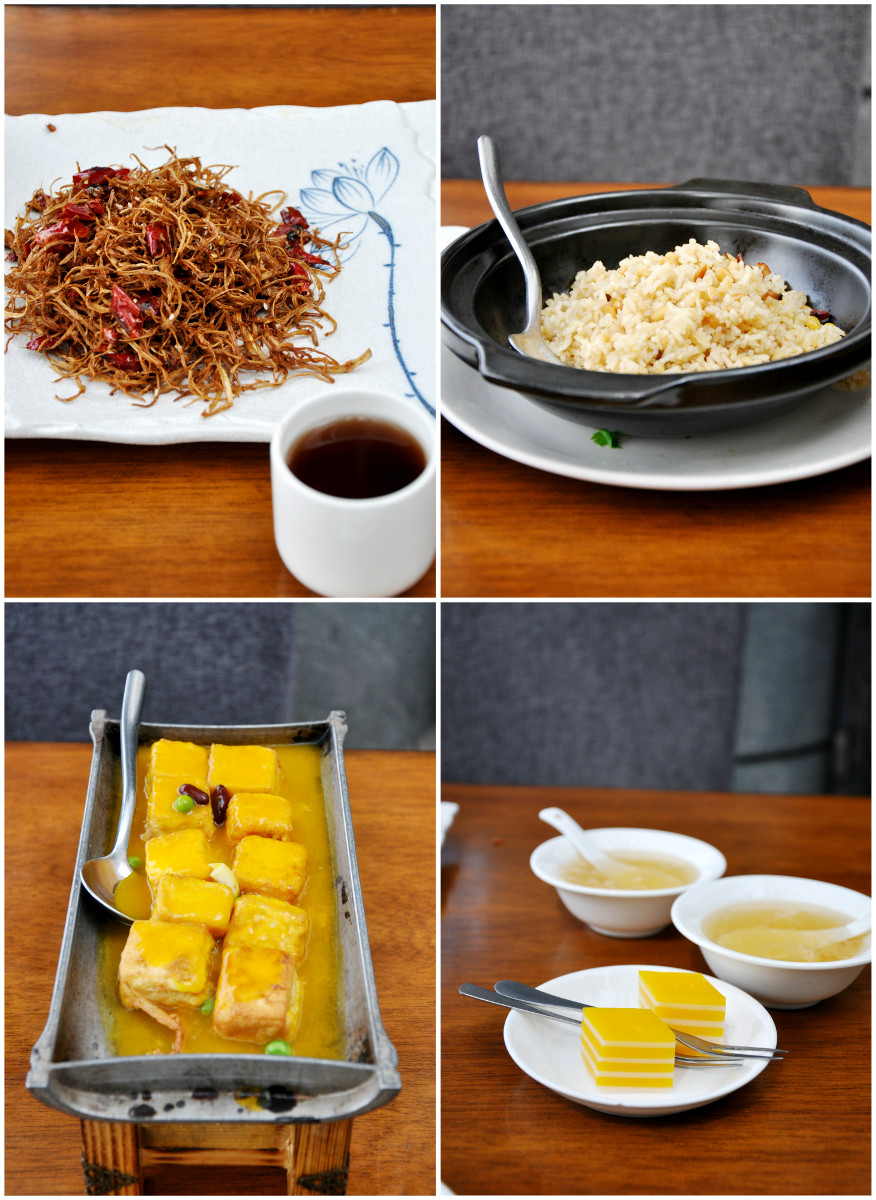 Pu Ti Su (菩提素) is a famous vegetarian restaurant chain in Chongqing. They have three venues in different locations, each has a different name. The one we’ve been to is called Pu Su Shu Shi, 朴素蔬食, literally meaning “simple and plain vegetarian food”, however, it is actually a fine restaurant located in a newly built mall compound. The compound is close to the river, along the Beibin Road (北滨路). Many locals live and hang out here, and tourists seldom venture to this area, well, unless they’re looking for some specific food to eat, like us, lol.

The restaurant is on the 5th floor, and the entrance is decorated by some bamboo installation. We almost missed it until a waitress greeted us there. I should mention that after the meal, the waitress will guide you through another door so you don’t go out through the same entrance. The interior features a lot of bamboo decoration, which nicely segregate the area into smaller compartments, which provides some privacy, yet still connecting with the rest. The light is dimly lit but good enough for dining. If you sit close to the window, you also get to see some nice view of Chongqing skyline at night.

The waitress did bring us an English menu. Unfortunately the few dishes that we really wanted to try were not available, due to the reason that they are seasonal supply. We ended up ordering something a bit less specific. 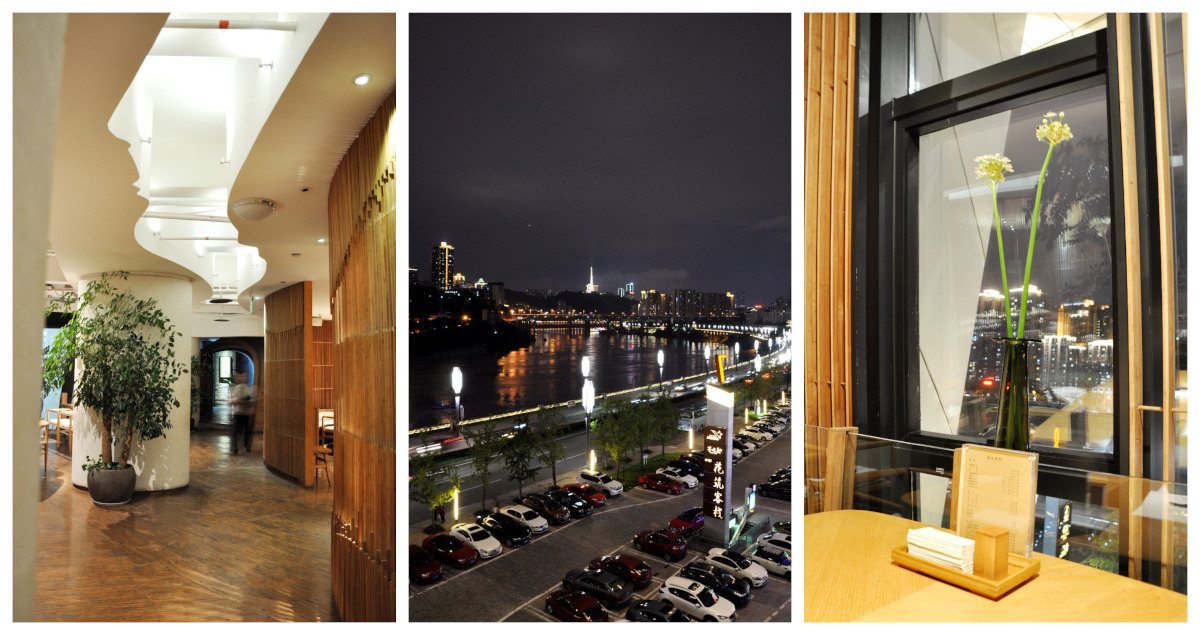 We had the vegetable rolls in nori as appetizer. It was nicely presented on a stand. We liked it. However the following tempura was slightly disappointing as they were not that crispy as we expected, plus, the sauce was way too light, which made the whole dish a little bland. Honey was so hungry for some decent tempura, but we haven’t yet found a place that serves vegan version. (Usually the tempura batter contains egg.) I guess I had to learn to make our own.

The vegetable on the iron plate was light and good. The sauce was flavorful yet not overwhelming, and it featured asparagus lettuce, yam, broccoli, paprika, yellow and purple corn. We enjoyed this one quite a lot. The waitress recommended an eggplant dish with a strange name called “The Eggplant of the Fall of That Year” (那一年秋天的茄子). This one was made of eggplant with coating, possibly deep fried, then shaped into coil, served with warm sweet and sour sauce, freshly poured over the top of the dish by the waitress when she served the dish. We like it very much, except the portion tended to be really big for two. Perhaps it was intended for bigger gathering. We rounded our meal with some dumplings, which had mushroom fillings, accompanied by vinegar sauce.

We quite enjoyed our experience in this restaurant. It has nice seating, good view and pleasant dining environment. The service was friendly. The dishes were nice and well portioned, although nothing super surprising, probably because we didn’t get to taste their specialties that much. I do recommend that you plan a bit walk along Beibin Road and mark this restaurant as a place to eat. It’s less tourist-packed and you get to have some quiet walk along the river, overlooking the center area of Chongqing. 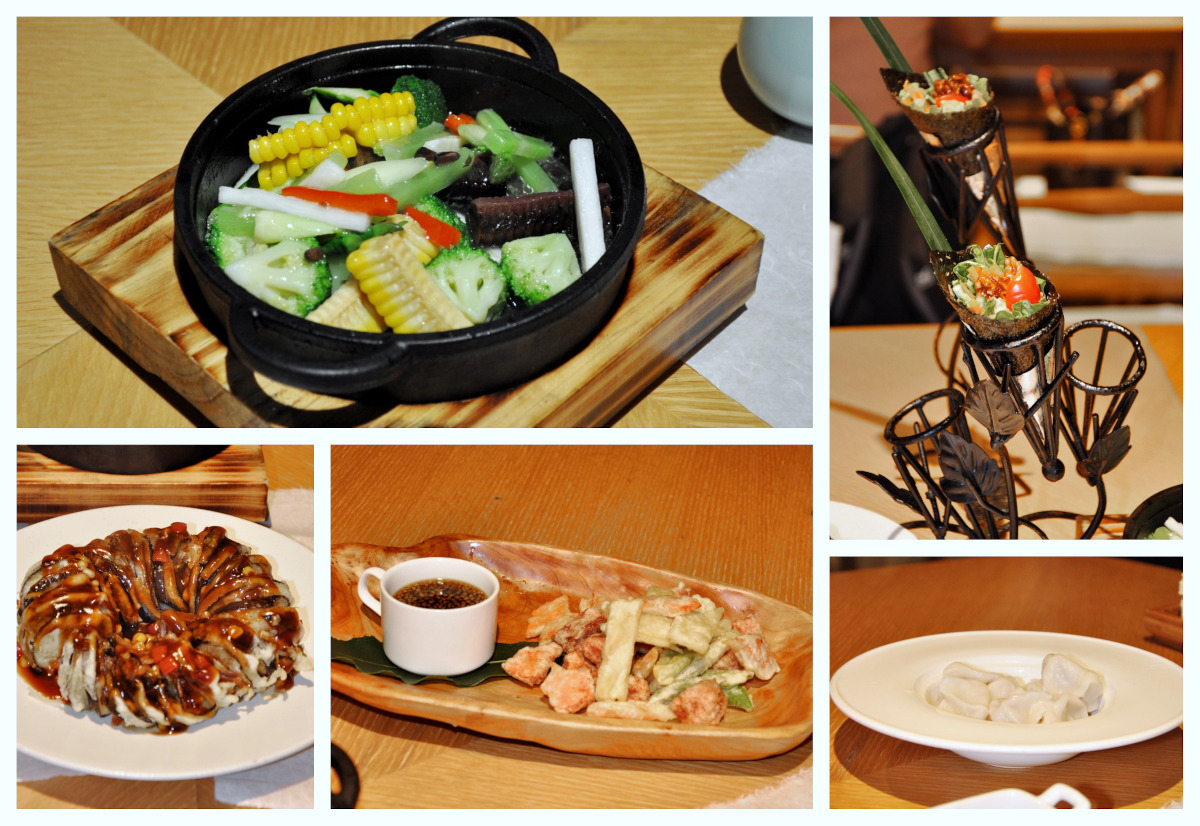