Gold Coast is a wonderful city along the beach, perfect for vacation where you want to relax by the sand while having access to some convenience. Here you can also rent an apartment and stay for a while, without worrying about your wallet when you live in exotic resort or five-star hotels and have to take a taxi to go to town for food (if you don't want to spend a fortune for every meal at the hotel). Although there aren't many options, but the ones we found were good enough. Here they are!

Cardamom Pod is very close to the tram stop at Broadbeach. A few steps away from the road, you would find a cafe and restaurant with funky decoration located right next to the park.

Like Govinda’s they are also a group of people related to Krishna, so Krishna painting and statues were found in the interior design. It is a quite spacey area with different types of cozy sofas, wooden tables and chairs, steel benches, flowery wall paper and lots of lovely green plants hanging everywhere. It feels like a garden with stuff the owner collects from various trips or market adventures. 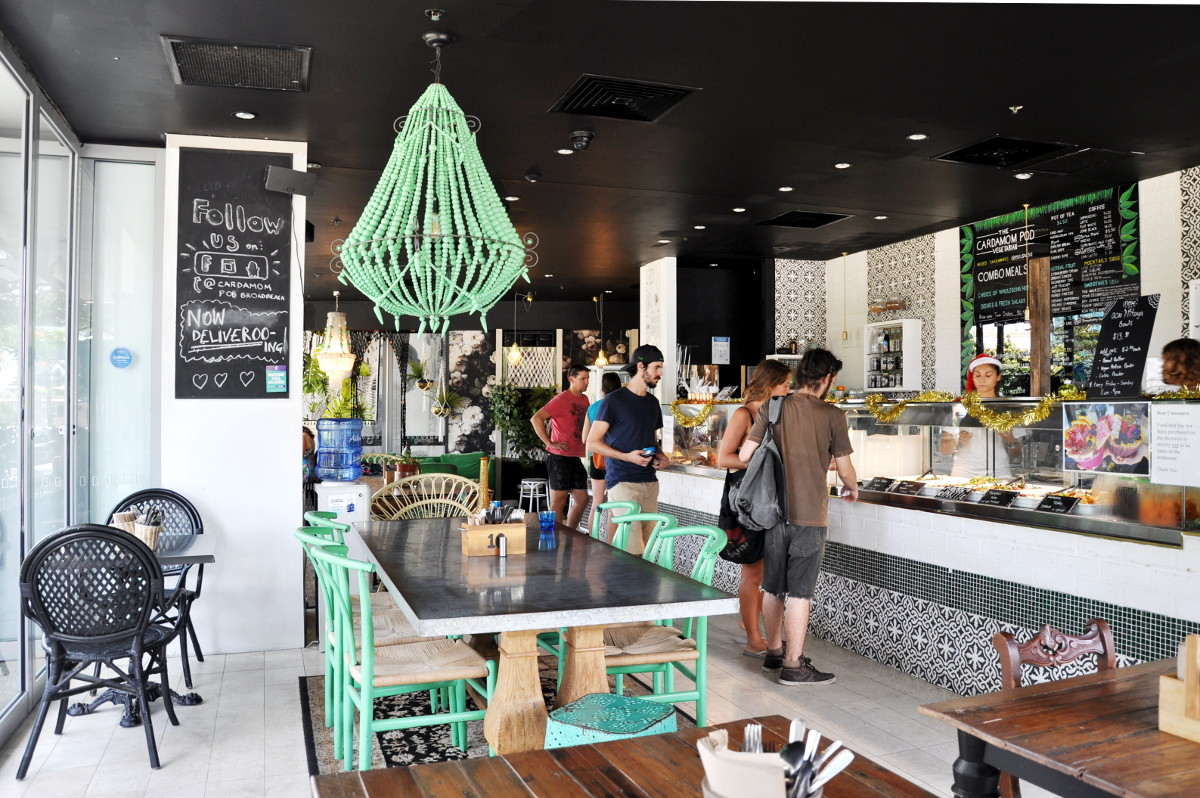 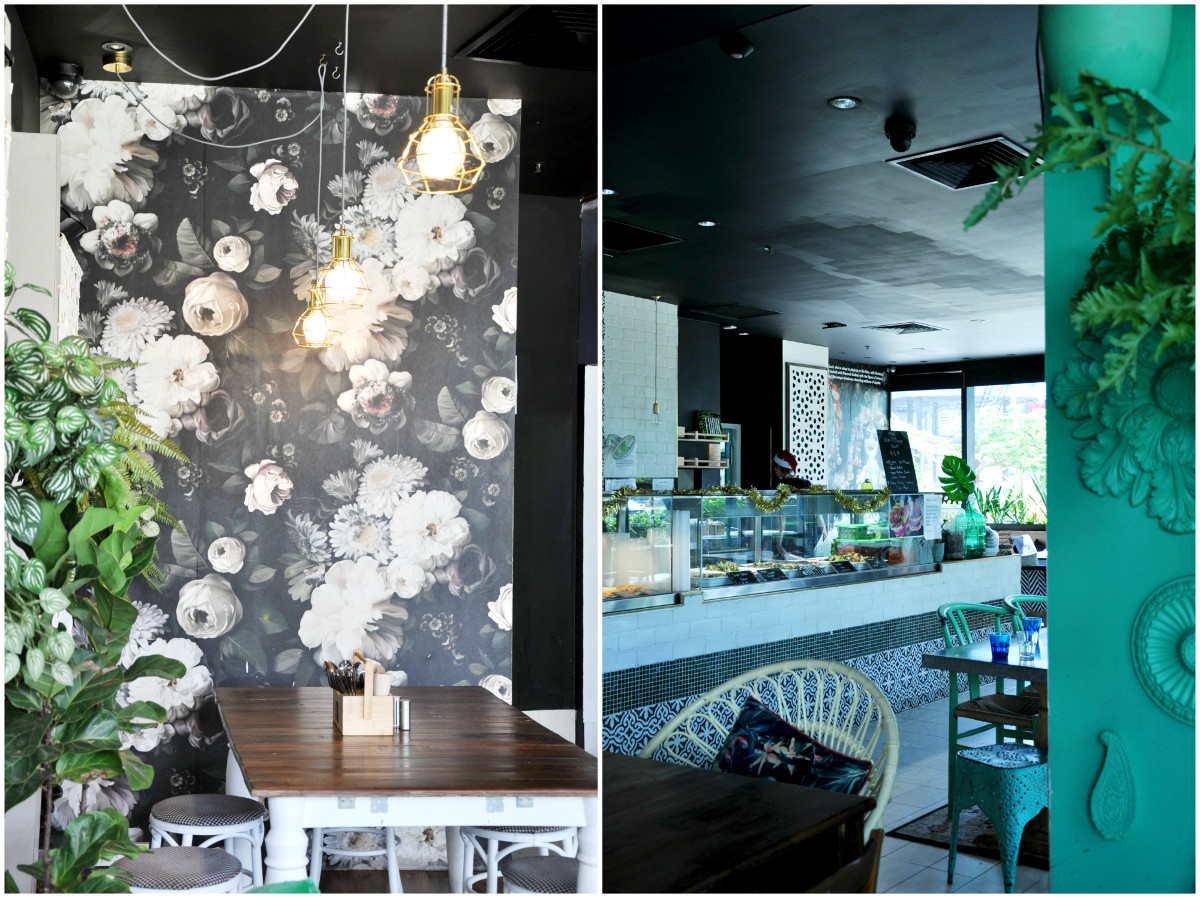 They serve hot dishes (mostly Indian inspired) and cold dishes in the counter, like many of the restaurants with similar style here in Australia. Unfortunately the ones I really wanted to try, such as lasagna was not vegan. So we ended up ordering four different types of salads with brown rice and green peas. 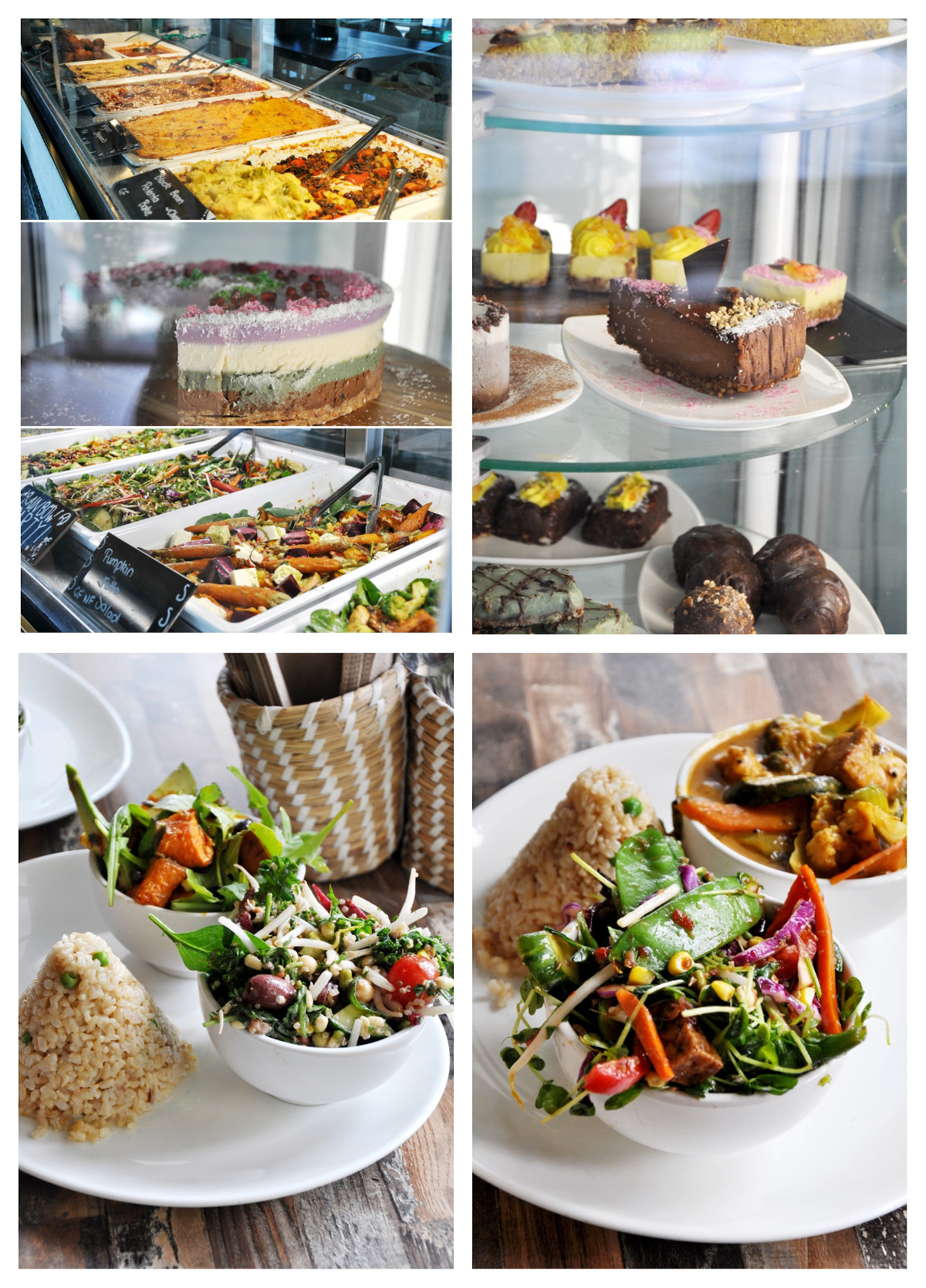 I would love to try their dessert if there was anything vegan, but we were in a hurry to catch our plane so we didn’t have time to check them out after our lunch. I think it’s a lovely place to hang out for either lunch, dinner or afternoon tea/smoothies. I would love to come back again if I ever visit Gold Coast. 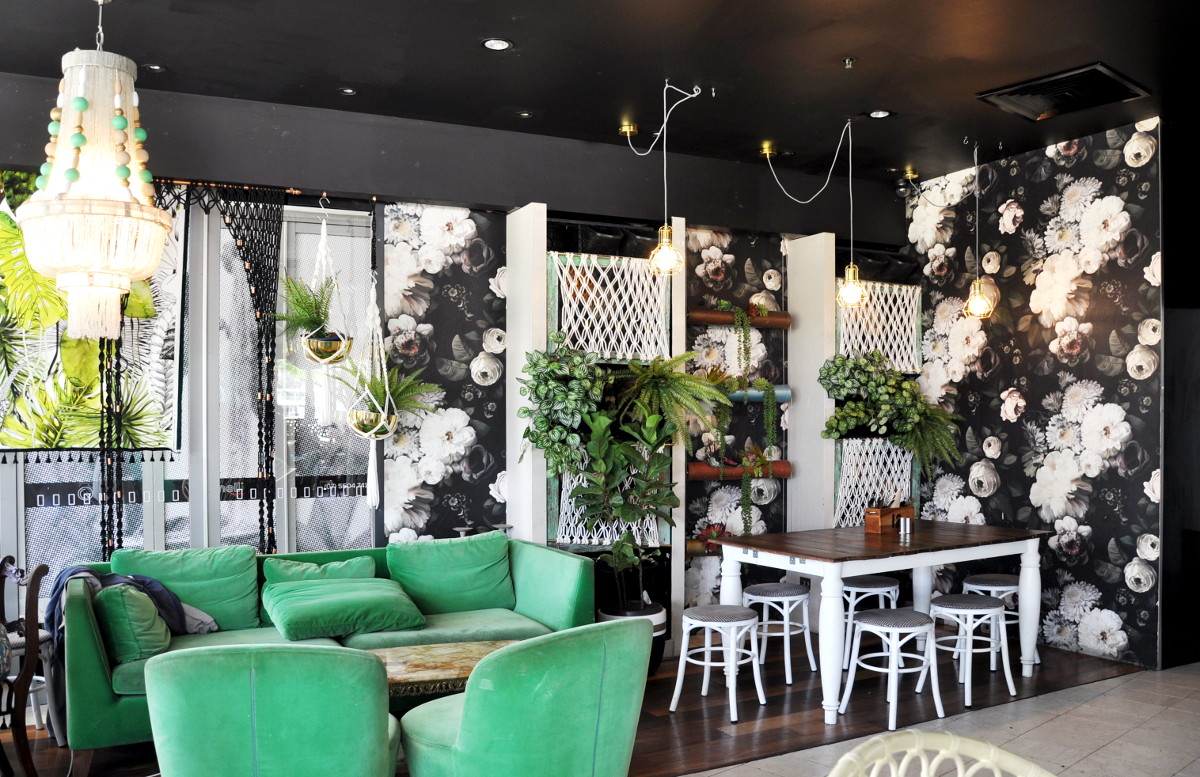 As the name suggested, Tian Ran is a Chinese restaurant. The word means “natural” in Chinese. We weren’t planning to try Chinese food, but on Christmas Day there weren’t many options in town and we prefer not to repeat what we have eaten. So we decided to give it a try, and we also want to check out the local Asian supermarket which is on the opposite side of the street.

The restaurant is on a quiet street, although it requires some walking after you get off the tram. It isn’t very big, just one medium sized room with some tables, on many of which bright green table cloths are on. Several Chinese-style lanterns hang high on the ceiling, together with shiny fuzzy Christmas decoration. Although the paintings on the wall indicates strongly the Buddhist background of the owner, the restaurant was playing merry Christmas choirs happily sung by kids.

We were greeted cordially by a merry Chinese man, whose laughter was a bit contagious. I was always glad to see happy people serving food, which made us all relaxed and in good mood. As always we wanted to try a few of our favorite dishes that we have loved in China, so we ordered those. 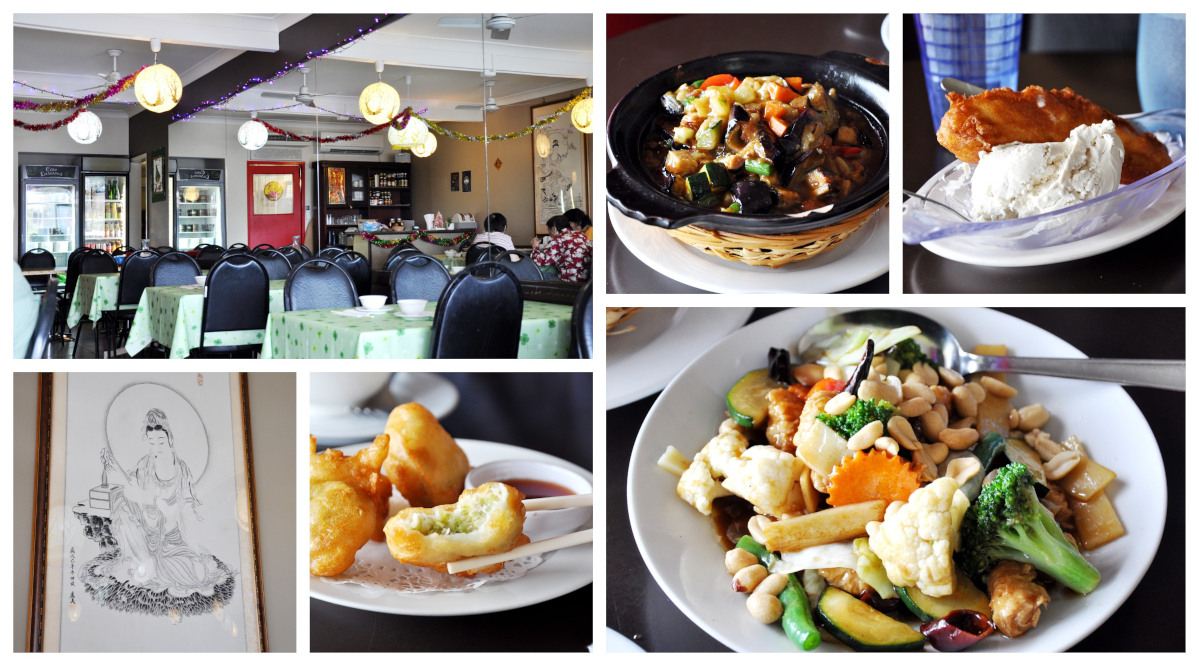 Deep friend wontons. They totally didn’t look like wontons I have seen growing up in China, not very pretty but not too bad with the sauce.

Gong Bao mock chicken. Unfortunately except the peanut as ingredient, which is one of the important elements in this dish, this one here tasted nothing like the original we expected. It was heavy on soy sauce, and that didn’t balance well with sweet and sour taste. The other vegetables dominating the plate made the dish a bit odd. As a dish it wasn’t too bad, but certainly it was not Gong Bao chicken.

Deep fried banana with vanilla ice-cream. Honey insisted that I try this dessert simply “because it is served in almost every Chinese restaurant in Sweden”, although it is not common in China. It wasn’t too bad, but Honey claimed it would have been better with syrup.

Fish flavored eggplant. Originally an authentic Sichuan dish that features spices used in preparing fish dishes, together with deep fried eggplant pieces, this dish was rendered more like a stew of mock fish cubes (never used in the original version), eggplant chunks with other vegetables in casserole. It was ok, although a bit greasy. And again, it was nothing like its name.

After our meal we were super full. As someone who has tasted numerous delicious vegan dishes in China, I regret to say that Tian Ran was not at all authentic. They’re more or less China-town style, offering dishes prepared by non-professional cooks using locally available vegetables and condiments, quite different from their originals but still retaining the original name. Even the Asian supermarkets abroad nowadays do carry a lot of spices, sauces and condiments exactly as those sold in Asia, many older cooks abroad still maintain their old way of cooking dating from a time when sources were scarce. The only good thing was that vegetables are generously provided in every dish, but that also made every dish quite identical. Or perhaps they’re simply catering to local taste. Maybe the Aussies here don’t really appreciate authentic Chinese food? I have no idea. Either way, I think Tian Ran is a nice place to try if you want something a bit different, when you’re traveling in Gold Coast for a longer vacation.

Govinda’s Vegetarian Restaurant is located in popular cities all around the world, and one of the most famous surfing beaches in Australia is no exception. You can find it close to the center of the region, a few steps from the beach, and also fairly close to the famous Q1 building where you get awesome view of Surfer’s Paradise.

The decoration is colorful, Indian and kitsch. One side of the wall has glass, the other hangs two Indian god artwork. The Govinda’s here caters 100% vegan Indian and fusion cuisine, although for some reasons (perhaps related with their belief and practice? I am not sure) the food doesn’t have garlic or onion as ingredients, in my opinion, which make it less tasty. There are self-serving counters with hot dishes, such as dahl, baked pasta with tomato sauce, baked potatoes, pakora, sweet couscous as dessert with vegan coconut butter sauce etc, as well as cold dishes such as quinoa salad, pasta with pesto salad, corn and couscous salad with a few sauces to choose from. 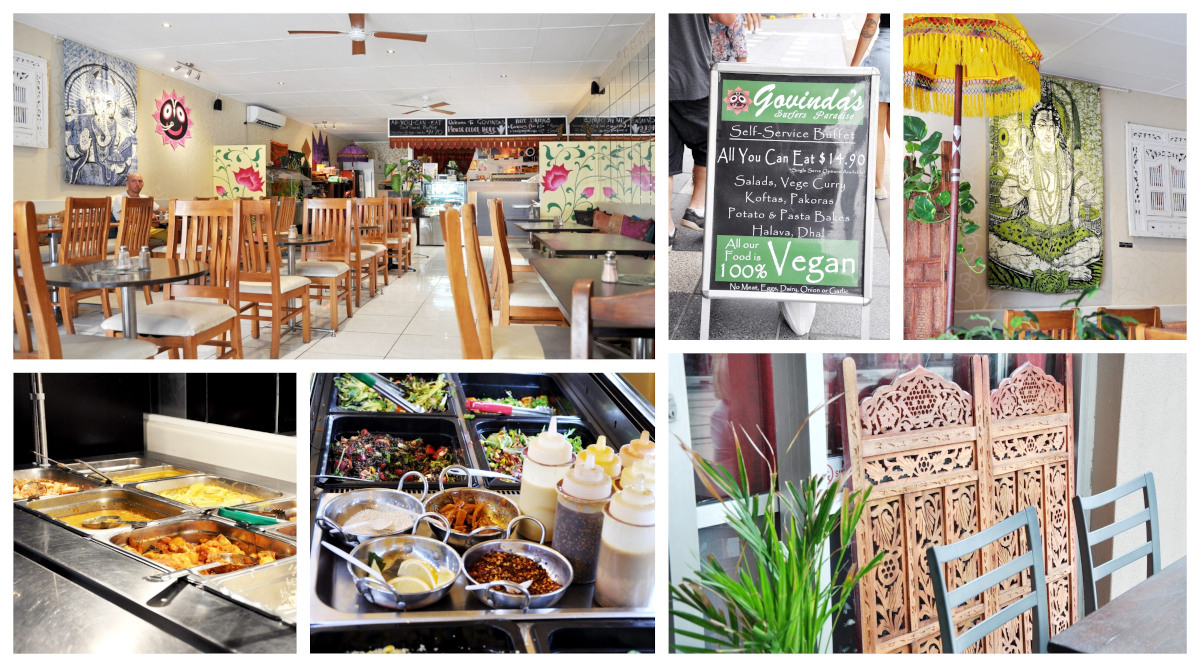 We tried a bit of everything, although the taste tends to a bit mild in everything. The good news (or bad news if you are trying to restrict your calories) is that it’s all-you-can-eat style, so big eaters don’t need to worry about portions. We ate ourselves quite full! By the way they do serve a few mud chocolate cakes, but you have to pay extra to get those. We took one of the peanut chocolate mud cake on Christmas eve, and it was quite delicious! Although it was all about cream and sugar, so I did feel slightly guilty about it… well, we all tend to eat slightly more than we want during holiday, don’t we? 😉

In a word, it’s a nice place for convenient lunch or dinner if you live in Surfer’s Paradise or happen to visit here. It’s all vegan so no need to worry about unwanted ingredients.